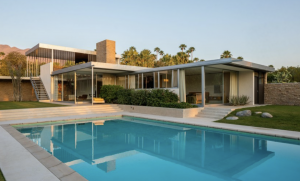 In Southern California, a select group of homes are so iconic that their names are more recognizable than the stars that inhabit them. The Stahl House in Hollywood Hills. The Gamble House in Pasadena. The Greystone Mansion in Beverly Hills.

A few hours outside of L.A. in the resort city of Palm Springs, another property holds this rare distinction: Richard Neutra’s Kaufmann Desert House. The legendary home — a Midcentury marvel cemented in history through famous photographs — is up for grabs at 5 million.

Set on more than two acres, the home dates back to 1946, when it was commissioned by department store tycoon Edgar J. Kaufmann — the same man who commissioned Frank Lloyd Wright to build the dazzling Fallingwater in rural Pennsylvania.

A year after being finished, the Palm Springs house grew to fame through Julius Shulman’s famous black-and-white photograph depicting its sleek exterior with the towering San Jacinto Mountains as the backdrop. A few decades later, it once again made its mark as the setting for Slim Aarons’ noteworthy shot known as “Poolside Gossip.”

The Kaufmann House has lured a few celebrity owners over the years, including singer Barry Manilow and former Chargers owner Gene Klein. The home itself, not its owners, is the main claim to fame; when The Times surveyed a group of experts in 2008 to crown the best houses of all time in L.A., the Kaufman House made the list despite not even being located in Los Angeles County.

Considered one of the most important Midcentury homes ever built, it recently received a facelift thanks to an intense five-year restoration from Marmol Radziner detailed by Dwell. Today, the low-slung abode holds five bedrooms and six bathrooms across 3,162 square feet.

A stunning concoction of glass, stone and steel, the home is made up of several wings that meet at the center. The floor plan emphasizes indoor-outdoor living, as almost every room opens to a scenic outdoor space.

Highlights include a living room with a floor-to-ceiling fireplace, a lounge with a bar and a spacious wood deck overlooking the property. Outside, a grassy yard surrounds a swimming pool.

If it sells for anywhere close to 5 million, it would be the biggest home sale in Palm Springs history. The current record belongs to the Bob Hope estate, a Modernist masterpiece that sold for 3 million in 2016.

This article was originally featured in the Los Angeles Times.